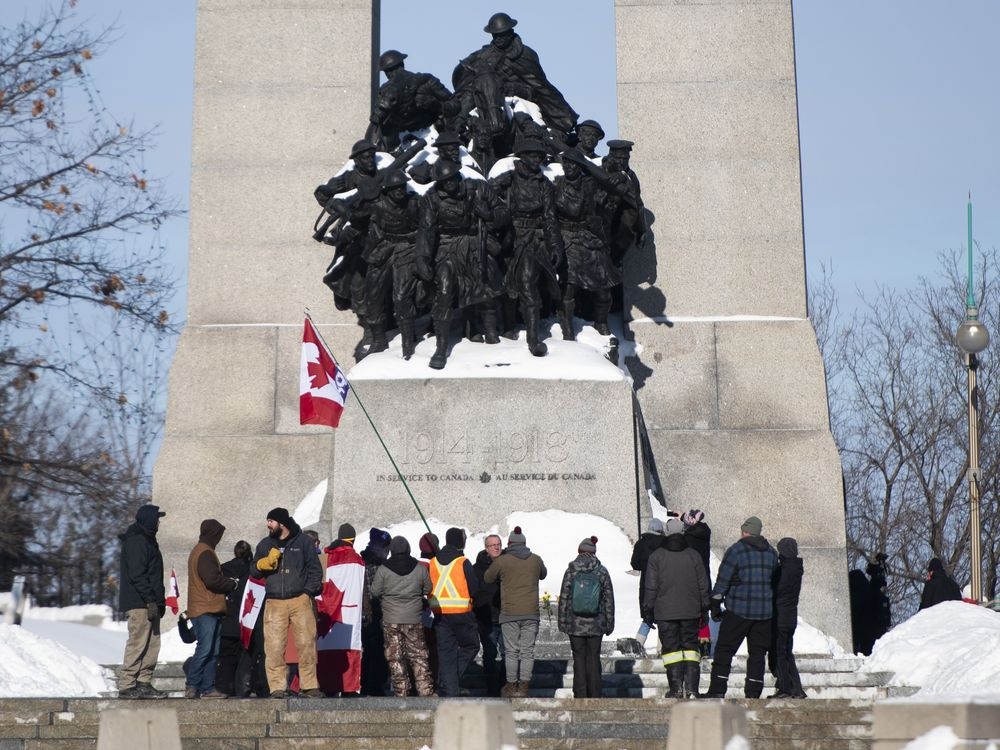 OTTAWA — The federal government is facing fresh calls to boost security at the National War Memorial after images surfaced showing someone draping flags on the Tomb of the Unknown Soldier.

Pictures and videos of the event, livestreamed online Sunday night and since disseminated on social media, depicted someone bowing his head at the tomb, which was covered with the American and Canadian flags.

The tomb contains remains of an unidentified Canadian soldier killed at Vimy Ridge during the First World War, and is intended to symbolize the sacrifices of all Canadians who served the country during times of war.

While it was not immediately clear what message the person who put the flags on the tomb was trying to convey, Defence Minister Anita Anand was among those accusing them of having desecrated the memorial.

Expect reaction today to Freedom Convoy live-streamer from Ottawa who last night streamed himself with a US flag draped on the Tomb of the Unknown Soldier. The stream was screen-capped by an American supporter. pic.twitter.com/7zl1MTgUU0

“The right to protest is something those honoured at the tomb sacrificed their lives for,” Anand wrote Monday on Twitter. “However, the desecration of this memorial is unacceptable and shameful.”

I am disturbed by yesterday’s events at the Tomb of the Unknown Soldier. The right to protest is something those honoured at the Tomb sacrificed their lives for, however the desecration of this memorial is unacceptable and shameful.

Veterans Affairs Minister Lawrence MacAulay also chastised those involved, tweeting that it was “disappointing to see continued disrespectful and dishonourable behaviour at the Tomb of the Unknown Solider.

“This sacred site deserves our utmost respect, honour and integrity.”

So disappointing to see continued disrespectful & dishonourable behaviour at the Tomb of the Unknown Solider. This sacred site deserves our utmost respect, honour & integrity. Pay respect appropriately with moment of silence & reflection on those who’ve sacrificed all for 🇨🇦. https://t.co/UkNvg80Oi6

Neither minister made any mention of stepping up security at the site, which has become a magnet in recent months for those protesting COVID-19 restrictions and the Liberal government.

That is despite repeated calls for such measures since the “Freedom Convoy” began last winter, when video emerged of a woman standing on the tomb during the early days of the protest. The woman was later questioned by Ottawa police but not charged.

Officials erected fences around the tomb and memorial after that incident, but they were later taken down by protesters, many of whom identified themselves as veterans and claimed they were reclaiming the site.

The memorial was more recently the scene of a large rally involving James Topp, an army reservist charged with speaking against vaccine requirements while in uniform before leading a four-month march from Vancouver to the site.

“It unfortunately seems to be happening with more regularity,” Bond said.

Youri Cormier, executive director of the Conference of Defence Associations Institute, a think tank on defence issues, echoed Bond’s assessment of the growing focus on the tomb for political messaging.

“The Tomb of the Unknown Soldier is not a place for slogans and civil disobedience, it’s a place of prayer, gratitude, and introspection,” he said.

“Setting an American flag on the Canadian cenotaph was a profoundly insulting thing for a tourist to do. It showed a great lack of judgment. … We’ve seen a lot of disrespect at the cenotaph emanating from the ‘Freedom Convoy’ and its supporters.”

Cormier added such an incident would not have been tolerated at the Tomb of Unknown Soldier in the United States, which is guarded around the clock by active-duty military members at Arlington National Cemetery.

Security for the Canadian memorial and tomb is provided by the Ottawa Police Service, with the Canadian soldiers on hand as part of the annual sentry program only ceremonial in nature.

The Department of National Defence referred questions about Sunday’s incident to Ottawa police, which did not respond to requests for comment Monday.

Public Services and Procurement Canada said it is reviewing its own video of the incident and will not launch a formal investigation, but “will work closely with law enforcement, as required.”

Asked about implementing greater security, PSPC spokeswoman Stefanie Hamel said the memorial and tomb “are monitored 24/7. At this time, we cannot comment on future plans for greater security at the monuments.” 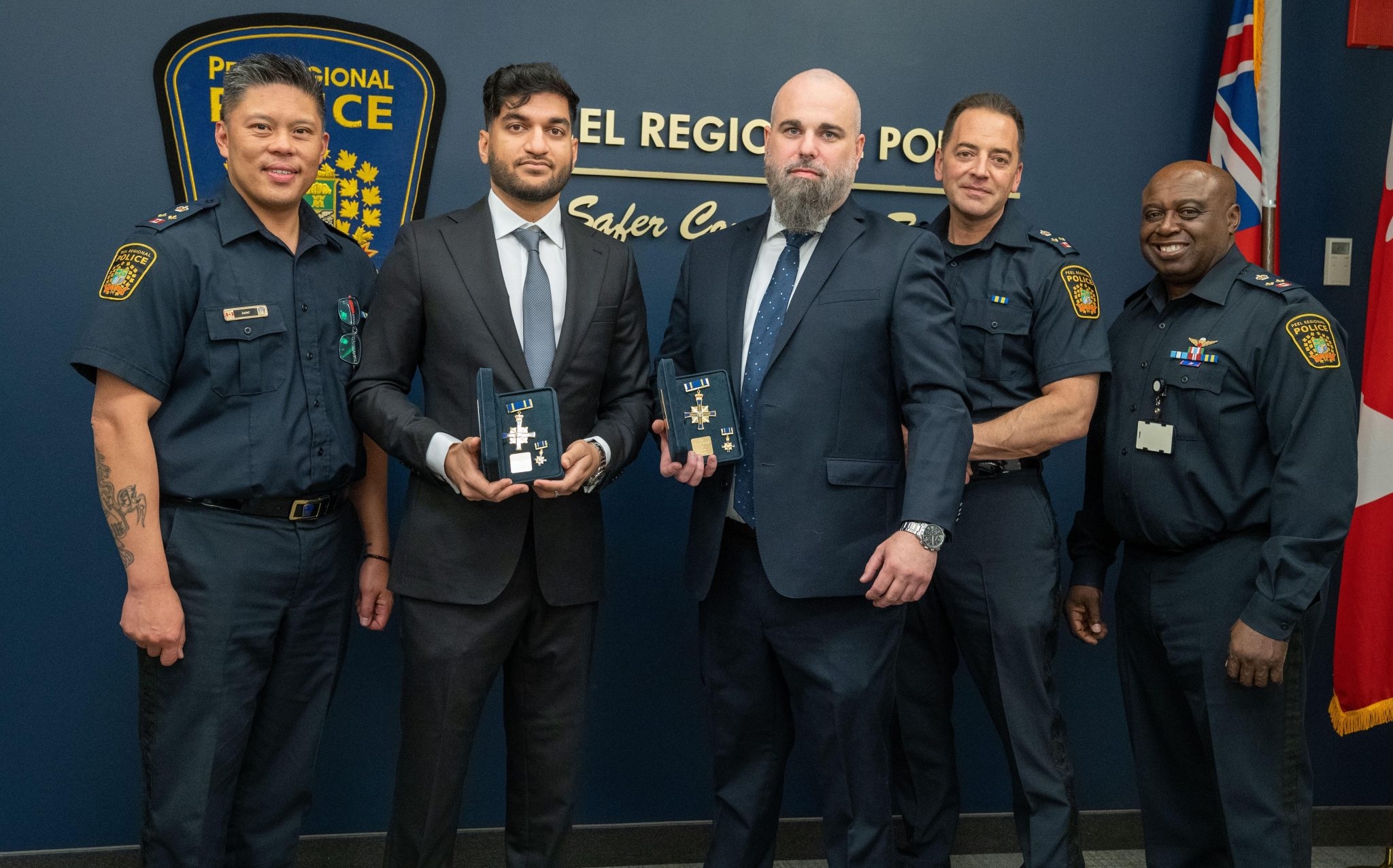 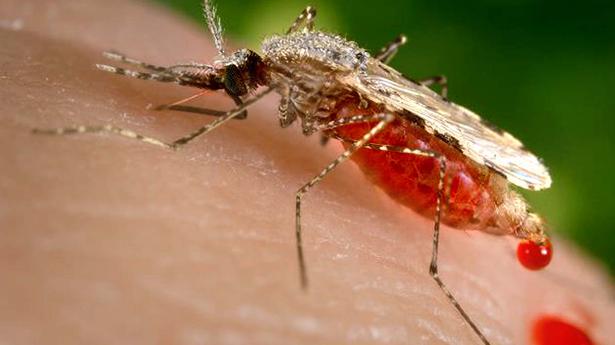 Viruses can alter your scent to make you extra eye-catching to mosquitoes, new analysis in mice finds