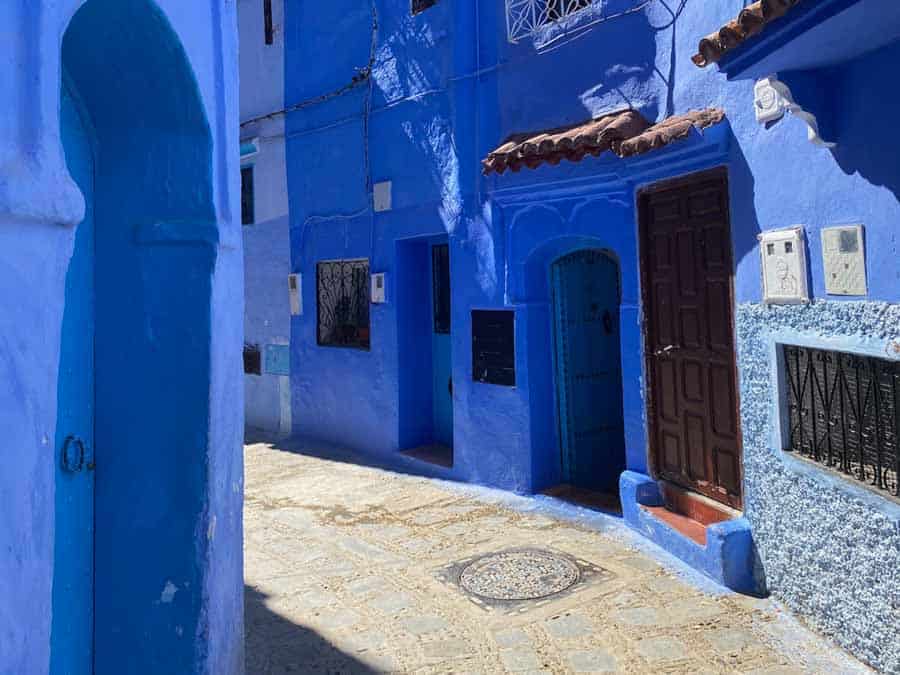 Perched beneath the peaks of the Rif Mountains in Northeastern Morocco, Chefchaouen looks like a dream! Houses, doors, stairs and passages are all daubed in brilliant shades of blue, ranging from aquamarine to cobalt. Of all the places we visited in Morocco on our 10-Day itinerary, Chaouen, or the Blue City (as it is nicknamed) was by far the most enchanting one.

Long before visiting Morocco I was well aware of Chefchaouen’s charm. But nothing could prepare me for the moment when I first caught a glimpse of its striking blues. It was magical, like a fairytale scene that unraveled before my eyes!

A Brief History of Chefchaouen

Chefchaouen’s history goes back to the 15th century, when Moulay Ali Ben Moussa Ben Rached El Alami – a distant relative of Prophet Muhammad – established here a military outpost intended to defend the area against invaders. The biggest threat at the time were the Portuguese and Spanish, who were attempting to expand their power and gain control over Morocco.

Traces of the old Kasbah wall are still present around the Medina and in the heart of town, where the Kasbah Museum is today.

Soon after the fortress was erected, the town’s population began to grow around it. Muslim and Jewish immigrants fled here from Spain after the Reconquista. Later on, in 1920, the Spaniards conquered the city which remained under their control until 1956, when Morocco eventually gained its independence.

The Story Behind the Blue Color of Chefchaouen

The first thing that becomes immediately apparent when you visit Chefchaouen is the omnipresent sky-blue color. The streets and almost all the buildings in the Medina are painted in blue, giving the entire city a serene and pleasant look. Hence Chefchaouen’s nickname: the Blue City of Morocco.

But why is Chefchaouen painted in blue?

The real reason behind the color is not very clear. Every time you ask around you’ll get a different answer. There is only one consensus: the tradition is really old. How old? That’s also up for debate.

Some say the blue color only appeared during the Second World War, when the Jews fled here from Europe. Others say it’s much older than that, going back to the 15th century when the first wave of immigrants from Spain settled in this area.

In Judaism blue is the symbol of divinity, the sky, and the ocean. It is also a symbol of peace and purity. According to the Torah (Numbers 15: 38-41), God instructed Jews to include a blue cord on the fringes of their clothing.

It may be that Morocco’s Blue City owes its traditional color to the Jews who immigrated here a long time ago. However, the Jewish population has long been gone from Chefchaouen, and yet the tradition still persists.

Some people believe that blue represents the Ras el-Maa Waterfall, which the citizens of the town use as a drinking water source. But most locals will tell you that the pale blue color has actually a practical purpose, helping to keep the houses cool in summers and repel the mosquitoes.

Whatever the reason for the enchanting azure color, thing is that it brought fame to Chefchaouen. So no wonder that the practice still continues, attracting tourists from all over the world to the Blue City of Morocco.

One thing that may take you by surprise in Morocco’s Blue City is that cannabis is sold openly everywhere. In fact, it’s so much a part of the every day life that you may see it on stands at the market, placed between fruits, vegetables, and herbs. So you should expect to be asked quite frequently on the street if you want to buy some hashish.

The reason for this is that cannabis grows in abundance in this area, therefore Chefchaouen is Morocco’ leading producer of marijuana.

Things to Do in Chefchaouen

There is not really a “list of attractions” in Chefchaouen as the city itself is the attraction. Its blue-painted houses and narrow lanes crammed with vendors and antique shops are the real reason people flock here. Most visitors will just wander around, hike up and down the streets and get lost on purpose in this maze of blue alleys.

One place to stop and take a rest is in the main square, Place Outa el Hammam, which is in the heart of the Medina. The square is the gathering spot of the locals, so it’s the best place to observe the pulse of the city and watch people roaming around, doing their daily chores.

Outa el Hammam square is full of pleasant cafes and restaurants, situated under the Mulberry trees. Here you can try some traditional tagine or sip mint tea on the cafés’ terraces. Or you can visit the Kasbah Museum next door, where you’ll learn more about Chefchaouen’s history. The old Kasbah has 11 towers, several parapets, elegant arches and domes.

And if you didn’t buy enough souvenirs on your way here, in the main square you’ll find lots of shops brimming with hand-woven rugs and brass teapots, leather artisans, and woodworkers.

Just outside the Medina, on the hill adjacent to the city, you can hike to the Spanish Mosque. The mosque is no longer a place of worship, so you can visit it even if you are a non-Muslim.

From up there you’ll have a beautiful perspective of the blue shades of Chefchaouen.

How to Get to Chefchaouen

Most travelers choose to visit Chefchaouen either from Tanger or from Fés, because they are closer. However, Chaouen can be reached by bus, taxi or private transfer from most cities in Morocco. Since trains do not run on this route, the trip may take as long as 9.5 hours if you come from Casablanca, or 5-7 hours if you come from Rabat or Marrakech.

If you are concerned about the long drive, you can always fly or take the train to Tangier. From Tangier the drive is only 3.5 hours to Chefchaouen. The cheapest way to travel to Chefchaouen is by bus. The ticket price runs between $5 to $19/person, depending on the distance.

Chefchaouen is a small town that you can easily explore on foot, although most roads are steep, narrow and with lots of steps. Taxis are available for moving outside the historic center, but if you want to enjoy the charm of the Medina you’ll have to walk.

Where to Stay in the Blue City of Morocco

The little Blue City of Morocco may not look like the kind of place where you can find high end accommodations, but you’ll be surprised. Most riads we checked out were pretty luxurious and quite charming. Prices run anywhere from $40 to $150/night for a standard room, but can go as high as $370 for a suite.

However, when choosing a place to stay in Chefchaouen you should keep in mind that the historic center is car-free. That means that if you want to stay in the heart of the Medina, you’ll have to drag your luggage up and down those steep alleys.

We stayed at Riad Cherifa Hotel, a traditional riad that is only 6-minute walk from the Ethnographic Museum of Chefchaouen. The hotels serves complimentary breakfast and has a beautiful rooftop terrace and a pool. The big plus of Riad Cherifa was the proximity to the place where busses, cabs and cars can stop. Our driver helped us carry our suitcases up to the hotel, but there was only a short 3 minutes walk.

Some other nice riads to consider in Chefchaouen are Dar Echchaouen Maison d’Hôtes & Riad, Riad La Santa, or Casa Xaouen. There are also a few pretty decent hostels in town for backpackers and tourists on a low budget. Like Gite Café Rueda Hostel, or Dar Elbakkali.

Chefchaouen is not short of cute, rustic restaurants where you can have some good Moroccan food. But don’t expect anything fancy, like the high-end restaurants in Fés, or Marrakech.

We liked Casa Aladdin and Casa Hassan which both have terraces. But there are some other famous ones worth trying, like Bab Ssour, or Lala Mesouda. And if you get sick of tagines, you can go to Pizzeria Mandala and treat yourself with a slice of pizza.

How Long Do You Need for Visiting Chefchaouen

The historic center of Chefchaouen is really small. If all you want is see the town’s main attractions and take pictures of the beautiful blue houses, then two days is more than enough. This will give you plenty of time to wander around also do some shopping.

But if you came to Chefchaouen to relax in one of the hammams or hike in the nearby mountains, you should allow yourself one or two more days.

Please pin this to help others discover the charm of Chefchaouen: 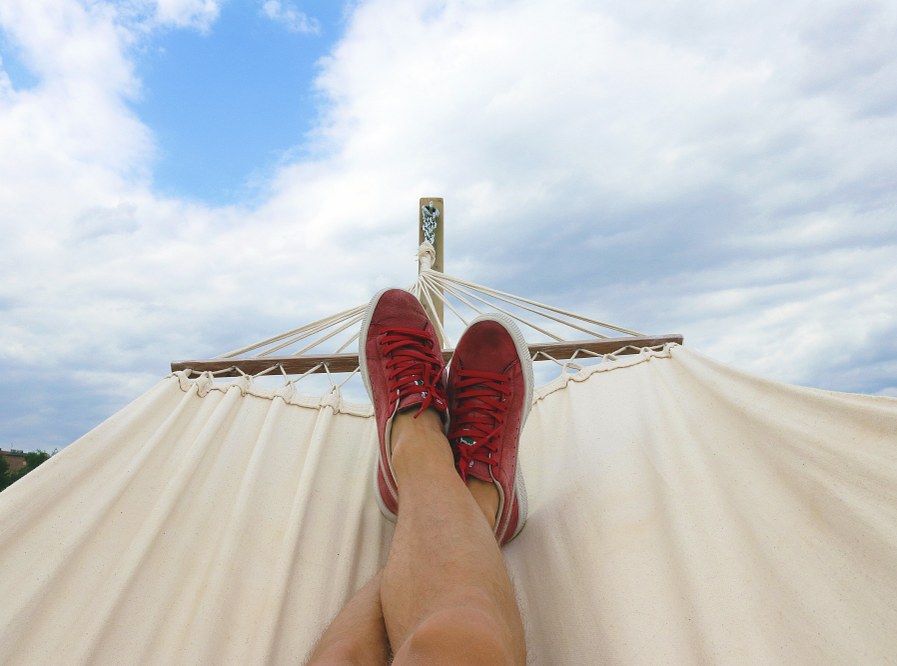 A Manual To The World’s Most effective Wine Destinations